​Part of the core of the Bauhaus, Johannes Itten was responsible for teaching there from 1919 to 1923. While teaching the ‘preliminary course’, the compulsory course students completed before moving on to specific courses, he taught students the basics of material composition, theorising that there were 7 different types of colour contrast; hue, value, temperature, complements, contrast, saturation and extention. His teaching methods involved encouraging students to explore their own feelings and experiment, emphasising the study of natural forms, canonical artworks and life drawing. In 1920 he published a book titled ‘The Art of Colour’ where he elaborated on the past ideas of the colour wheel and designing his ‘colour sphere’.
​
Most of Itten’s art from around the time of his involvement with the Bauhaus uses geometric shapes, including repeating circles and rectangles and spirals of different colours that clearly demonstrate his colour theories. For example; in Education there is a striking example of contrast, with the dark purples surrounding the light yellows from the opposite end of the colour wheel. The shapes used in his work all had a purpose in the meaning and composition of the artwork. During his earlier years, Itten was fond of architectural structures leading him to design The Tower of Fire is a unique example of Itten’s work as it is a large stained glass parametric model. His style of work is still clearly visible, with the squares following his colour theory although he never completed it.

Itten believed in a religion called Mazdaznan which thought the earth should be returned to a garden to make it easier to communicate with God. He was also practiced meditation, including these practices in lessons, and was a vegetarian. These beliefs meant that his ideals clashed with Walter Gropius who wanted to push the school towards mass production rather than individual expression, leaning Itten to resign from teaching in 1923.

After leaving the Bauhaus school he worked in various art schools around Germany as well as helping teach colour courses at the Ulm school of art in 1955. 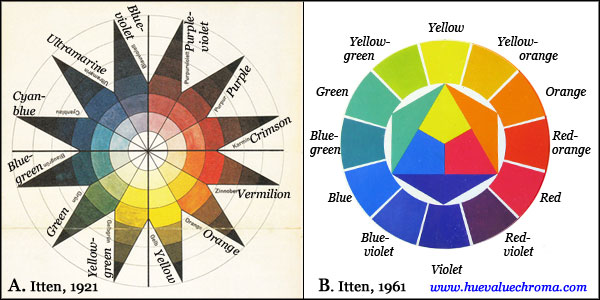